You are truly blessed if you have a family that shares your karate journey with you. The support and encouragement you experience fuels your body, mind and spirit and it carries you through difficult times.

Only through mindful, disciplined, repetitive training do you discover the intricate gifts that karate can offer. Don’t anticipate your progress. It will just cause you frustration and anxiety. Rather accept it as a result of your on-going disciplined effort.

The ultimate goal of training in traditional karate is not merely the perfection of fighting skills, but rather the total development of the human character where fighting is no longer necessary. Karate, as a martial arts, is to develop the character and self-esteem of its students. It teaches you respect, control, calm temperament, humility and self-control.

Kaizen is an approach of creating continuous improvement based on the idea that small, on-going positive effort and changes can reap major improvements over a period of time.

The underlying basic principle of Kaizen is a dedication to improving better effectiveness, more satisfaction, and less waste. To achieve these core tenets of continuous improvement, it is important to standardise an easily adjustable, repeatable and organized process.

The Nintai-Ryoku Dojo is a small and private dojo that can accommodate up to a maximum of 4 students, designed to try and capture the character of original Okinawan dojos. You will be training on professional Tatami mats in an aircon facility. Traditional weapons and related modern martial arts training equipment are supplied. Private shower and toilet facilities are available. My lovely wife Ilse is always ready with breakfast and coffee after training. This is her contribution and labour of love towards our vision. At Nintai-Ryoku you must be prepared to become part of the family. 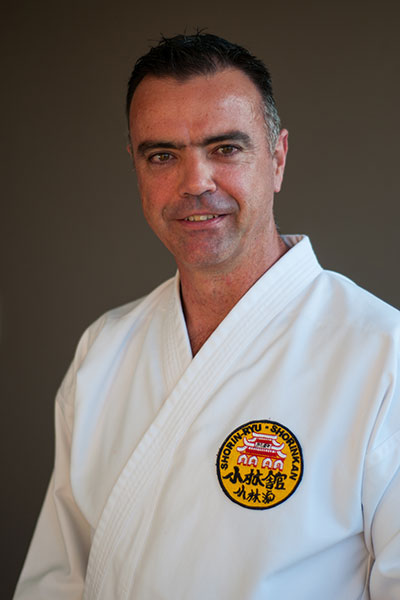 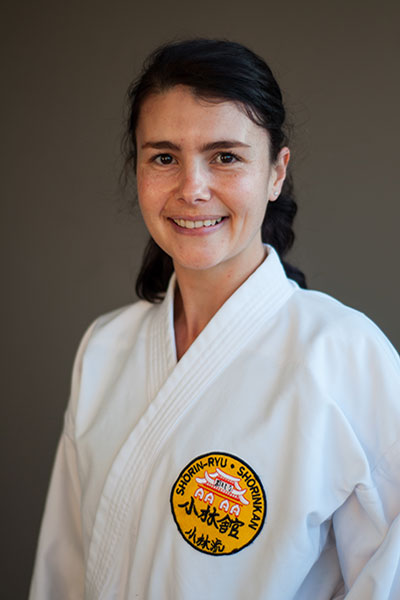 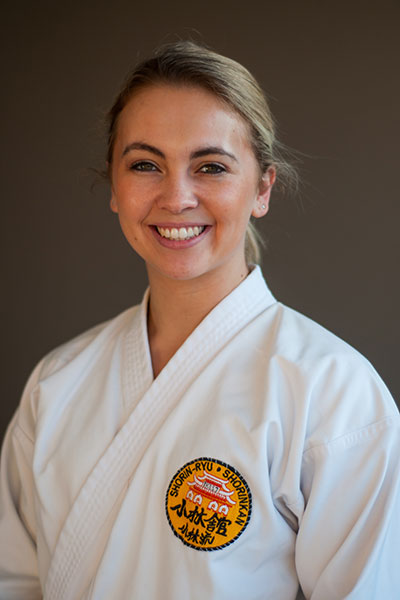 ALL ABOUT SENSEI PIETER DU RANDT

Karate has been part of my life from my early school days. I started training with Sensei John Burger when he opened a new neighbourhood Dojo in Walmer Downs Port Elizabeth in 1988. We could not wait for our karate classes on a Tuesday and Thursday afternoon. All the neighbourhood and school friends use to meet up and ride to class with our bicycles. Those days it was still Funakoshi Karate under the leadership of 8th dan Kyoshi Claude Johnson.

After a few years of training I decided to join Sensei John Burger at Central Gymnasium to train directly under the mentorship of Kyoshi Claude Johnson.

For reasons that I have forgotten already, I had changed Karate styles in 1992 and started training Shotokan Karate under the late Sensei Ronnie Hidge. I successfully graded up to 3rd degree brown belt in Shotokan Karate.

Being an all-round active person, there were other activities that caught my attention, and I started riding and racing off-road motorbikes. Karate took a backseat for this period. After racing continuously for almost 10 years I decided to park my racing boots because it was something that was to time constraining with my son also getting a bit older.

When my son showed an interest in Karate in 2014, I decided to get back to training. I looked up my old karate family and started training Shorinryu Shorinkan karate with 7th dan Kyoshi Steve Johnson and 7th dan Kyoshi Karl von der Marwitz at S & K Karate at Grey Primary School in Port Elizabeth. Shorin Ryu Shorinkan is an international style of karate lead by Hanshi, 10th Dan, Minoru Nakazato. Its origin comes from Okinawa Japan and dates back many generations. It has more than 5000 members across the globe including America, Canada, Australia and South Africa, to name a few.

In July 2019 my whole family undertook an international tour to Okinawa Japan to train under our international  leader of style Hanshi ,10th dan, Minoru Nakazato, where I was given the opportunity to attempt my  3rd Dan Karate and 1st Dan Kubudo (Weapons) grading. I am honoured that I managed to pass both my tests.

Karate to me is an endless, continues journey of learning and improving not only physical skills but also everyday life skills like character, humility, respect, discipline, mindfulness, hard work and perseverance.

ALL ABOUT SENSEI CAYLA STUTHARD

My name is Sensei Cayla Stuthard; I am a 2nd Dan belt black in karate and 1st Dan black belt in Kobudo. I started karate 11 years ago under the guidance of Kyoshi Claude Johnson. Through the years I have had the opportunity to be taught by Kyoshi Claude, Kyoshi Steve and Kyoshi Karl. I am the Sensei at Greenwood Dojo where I have the opportunity to teach what I have been taught and pass down the knowledge that I have been given over years to my students. The reason I started Karate 11 years ago, and the reason I do karate today are two completely different reasons. 11 years ago, I was a 10 year old girl who wanted to do karate mainly because I wanted to be a black belt when I am “big”, but now that I am a black belt I have realized that there is so much more than that! It has become a lifestyle, it has become my passion, it makes you realize that as soon as you think you know something, there are tons more still to learn, but yet that is the beauty of doing such a sport. There is quote that states the following: “Martial Arts is like a mountain. You see the top and you hike and you hike, and you climb and you finally reach the peak, but you realize it is a false summit. Then in front of you lies and entire new mountain range.” This quote resembles Karate to me in such an accurate manner, as once you reach the “top” you realize how much more there is to Karate than just obtaining your black belt or obtaining whichever part of karate you would classify as you “peak”.

Karate has and always will be a major part of my life; it has molded me to be the person I am today. Karate has taught me discipline, self-respect, self-control and motivation. I see it in the smallest and most simple things in life of how Karate has affected me, from waking up in the morning to getting all my tasks done on time and also with doing other sports. The discipline that karate has taught me doesn’t just stop once I walk out of the dojo, it continues in my personal life and work life too.

I strongly believe that doing karate or any form of martial arts gives one an advantage in life which you can be very thankful for and that will never be a skill “wasted”.

ALL ABOUT RENSHI MEGAN MINNAAR

I have loved martial arts since I was 3 years old. It started with the all famous Teenage Mutant Ninja Turtles, Raphael being my favourite still to this day. I also enjoyed watching the 3 Ninjas films.

When I was 11 years old a karate demonstration was held at Greenwood Primary School with Kyoshi Claude Johnson and his son Kyoshi Steve Johnson. After trying the first lesson I went home and asked my mom if I was allowed to start karate and she said yes. My mom only bought me a gi after I had shown commitment as she had thought it was just a phase. I’m still doing karate today, so this is the longest phase that I have ever been through J which brings me to say that karate is a lifestyle, there is no end really. I am a 5th Dan in karate and a 3rd Dan in kobudo, training under Kyoshi Steve Johnson and Kyoshi Karl von der Marwitz.

A few years back I had the opportunity to go to Okinawa, the birth place of karate and my karate had changed, my karate became my own; it was for me and improving myself. Training smart not hard. Let’s face it, it’s pretty cool doing karate but when we get old we still want to be able to kick butt if we need to. Don’t get me wrong, I love to train hard, it feels great but training smart is more beneficial to the mind and the body in the long run. We have to look after our bodies physically if the plan is to do it for many, many years.

It is a continuous learning process at every level. I’m constantly learning, not only from my instructors and karate family but I am also learning about myself. Karate is a discipline and the higher the level we are, the more responsibility there is to train on our own, self-teach and also impart knowledge onto others.

I believe that the following are essential when reaching higher levels, doing research, keeping relaxed, training the repetition of movements and visualising, your bunkai brain needs to be switched on all the time.

The Nintai-Ryoku Dojo is a small and private dojo that can only accommodate 4 students per training session. The Dojo operates an ‘Honesty Box’ Training Fee System which sees students donating as much as they can to use the facilities. All of the training fees raised are then donated to the Love Story Charity.

Karate is about giving back. This includes giving back to your students through teaching and giving back to society in general through offering your time and efforts by utilizing your unique talents. Time and health is the most precious treasure God has given us. At [...]

Karate as a lifestyle: Okinawa is recognised as the birthplace of karate.  Why, “Nintai-Ryoku”? Translated it means “Patient Perseverance”, which captures the character of the Okinawan people. Despite the hardship they went through, they decided to stay friendly, courteous and humble people, slowly and patiently [...]

Training at Nintai-Ryoku is an on-going daily discipline, but from time to time we are running special events like Self Defence Classes and Special seminars with Senior guest instructors from our own Shorin-Ryu Shorinkan style as well as instructors from other styles of martial arts. We [...]

X
Hello, please choose the instructor you would like to talk to.